Shedding light on the 'dark ecology' of grasslands 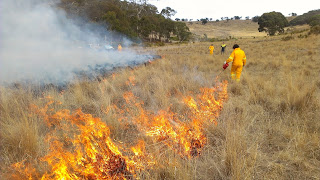 The fire–ecosystem functioning relationship in temperate native grasslands of southern Australia has been well-described. Recurrent fire promotes native grass productivity, benefits inter-tussock native flora and can reduce the potential invasion of exotic plants. As such, it is recommended that fire be used as a management tool to manage these endangered ecosystems. Much of the recent research has been about the timing and frequency of fire to achieve these aims.

However, the ecological consequences of frequent, prescribed fires on below-ground microbial community composition and, as a consequence, the long-term impact of repeated burning on soil health, have not been deciphered. This is not unexpected - it's hard to study the diversity of an ecosystem that remains hidden from view, belowground in the soil. The 'dark ecology' of ecosystems remains virtually unexplored, but new tools are changing this. Our new paper - led by La Trobe Research Fellow Dr Eleonora Egidi - has just been published (early online) in FEMS Microbiology Letters, and sheds some light on the impacts of fire on soil biota.


To understand the relationship between fire and the soil mycobiome, we conducted the first analysis of the soil fungal communities in native Themeda triandra-dominated grasslands undergoing regular burning in temperate Australia. The mycobiome was characterized in relation to Fire-Frequency (1, 2, >3 yr long-term fire intervals) and Time-Since-Last-Fire. The impact of these fire parameters on fungal community composition, richness and diversity was quantified by MiSeq Illumina sequencing of PCR-amplified nuclear rRNA ITS1 fragments to assess indirect and direct effects of prescribed fires.

Our first impressive finding was that we found 503 OTUs in grassland soils. There are approx. 10X more entities in the soil than the number of species observed in the standing vegetation. While we could not put names on the entities in the soil, our sequencing allowed us to discriminate between taxonomic units and hence, give an indication of the diversity of life occurring under the vegetation.  Ascomycota were the most abundant OTUs. Members of the Ascomycota are commonly known as the sac fungi or ascomycetes and they are the largest phylum of Fungi. Members of the Glomeromycota were also common - 167 of the 503 OTUs. This group is important as they form arbuscular mycorrhizas (AMs) with the roots of land plants.

We found that the fungal community composition was influenced by fire regime (frequency) moreso than time-since-last fire. Overall, the change in composition was related to small changes in relative abundance of common taxa and to more dramatic changes in frequency of lower abundance taxa, implying a general resilience of the fungal community to fire disturbance. Several OTUs present in low fire frequency samples (>3 yr burning) were not found in the frequently (annual) burnt samples, and vice versa, suggesting that they may represent fire-sensitive and fire-resistant taxa respectively.

The Fire-Frequency related shift in composition was particularly significant for fungal taxa assigned to the phylum Glomeromycota. Members of this phylum are mutualistic, obligate symbionts able to form arbuscular mycorrhizal (AM) associations, suggesting that the differences observed between >3yr and annually burnt grasslands may be driven by the difference in the plant community composition that results from different fire regimes. However, this conclusion remains very speculative and worthy of further investigation.


Soil microbes represent the majority of biodiversity in terrestrial ecosystems and are clearly a diverse component of temperate native grasslands. Because they are intimately involved in ecosystem functions, we suggest that changes in fungal community composition should be taken into account when assessing the impact of land management strategies in temperate grasslands, and we now have (relatively cheap) sequencing technology to do this. It goes without saying, but there is still much to be learnt.

Posted by John Morgan at 21:54 No comments: Links to this post

The project
The Button Wrinklewort daisy Rutidosis leptorrhynchoides has helped reveal the importance of genetic self-incompatability and ploidy variation for plant conservation. Despite this contribution to science, Rutidosis is in serious decline in the wild, and is listed as Endangered.

The PhD candidate will work in a multidisciplinary team investigating the genetic rescue of Rutidosis.  The project will involve the production of plants with known genetic heritage, from glasshouse crosses, using a range of wild populations. The offspring will form the basis for replicated experimental populations in the wild and the glasshouse. Their fitness and genomic structure will be tracked over several years. The candidate will have opportunity to develop independent questions. The project is expected to yield new populations of this endangered species, as well as new insights into the way that genetic rescue acts in populations and at the DNA-level.

The team
The project forms part of a larger ARC Linkage Project on multiple plant and animal species - “Genetic rescue of Australian Wildlife” - led by Prof Paul Sunnucks at Monash University, and involves nationwide partners with a wide range of skills and responsibilities for wildlife, including the Department of Environment, Land, Water and Planning (VIC), Diversity Arrays Technology, Zoos Victoria, Environment and Planning Directorate (ACT), the Department of Parks and Wildlife (WA), University of Canberra, and Andew Young (CSIRO).

Eligibility & application
The candidate will have a Masters or 1st class Honours degree in a relevant field,  enthusiasm for conservation biology, and a good work ethic.  The successful candidate must secure an LTU PhD stipend scholarship. Applications for scholarship close 31 October 2016, but candidates need to submit a CV no later than Friday 23 September 2016.  Up to $15,000 is available (over 3 yrs) to cover the costs associated with the field data collection and glasshouse work. $2500 per annum is available to support travel to conferences. The successful candidate will commence the project in early 2017.

Posted by John Morgan at 19:36 No comments: Links to this post