What is grazing in native grasslands actually trying to achieve?

In 2003, Josh Dorrough at the Arthur Rylah Institute established the Long-term Ecological Grazing trial (LTEG), a study where three native grasslands across western Victoria - all with a history of grazing by sheep - were selected to examine how manipulating grazing regimes could be used enhance conservation outcomes.

At each site, there were six grazing treatments, each replicated three times. Apart from continuous grazing, and grazing exclosure, the other four treatments tested for the effects of (a) season and (b) duration of grazing. You can read about the results of the initial findings (to 2007) in Zimmer et al. (2010) Forb responses to grazing and rest management in a critically endangered Australian native grassland ecosystem. The Rangeland Journal 32, 187-195.


I'm lucky enough to be using the study at 10 years after the plots were established to look at longer-term impacts of manipulating grazing regimes on native grasslands (with my new student Kaitlin Wright). The plots are the longest running trials in southern Victoria addressing the question: can strategic grazing  improve/restore threatened native grasslands? At 10 yrs, the plots have been through one of the longest and most intense droughts in Australian history, and plant community dynamics that were not evident in the first 4 yrs (the funding cycle) are likely to be much more apparent now.

My first task is to figure out what indices I would use to describe the changes that have occurred over the last decade.

Traditionally, you would monitor species richness (more correctly, this is species density - the number of species per unit area). Ecologists call this alpha diversity. You might specifically want to know about native species (hopefully they wouldn't go down) and the number of exotic species (hopefully they wouldn't go up). This seems (to me) to be one of the major objectives of the use of conservation management by grazing. So let's state it here: grazing maintains (or enhances) native species richness at the expense of exotic species richness/cover.

But what else matters. How might grazing be used to effect other (positive) change in grasslands?

It's clear to me that we could enhance the understanding of vegetation change through time by grazing if we consider aspects of spatial heterogenity and spatial and temporal turnover. Do certain grazing regimes enhance spatial heterogenity? If so, you might think that beta diversity might increase. Hence, let's state this hypothesis: grazing (either duration or season) can be used to enhance spatial variability, leading to positive outcomes for native plant diversity because it enhances niche variability. By enhancing variation in structure (with consequent effects on nutrient fluxes, light and moisture), deterministic processes may have greater impacts on species patterning than currently operate on grazed grasslands.

I've been giving some thought about what you'd really try to achieve by shifting regimes or disturbance types. And I've come up with three motivating questions illustrated in the slide below. I can't take credit here - my NutNet collaborators in the USA (Ellen Damschen, Peter Adler and others) are asking similar questions about grassland response to nutrient addition and grazing, but their approach seems relevant to grasslands in western Victoria too! In all cases, I think there is more to be gained than just looking at the number of species. Does continuous grazing homogenise grasslands and can we manipulate aspects of variability (in space and time) to promote positive community responses. If not, why not? Does grazing reduce exotic species cover regardless of richness responses? What do you think is important? 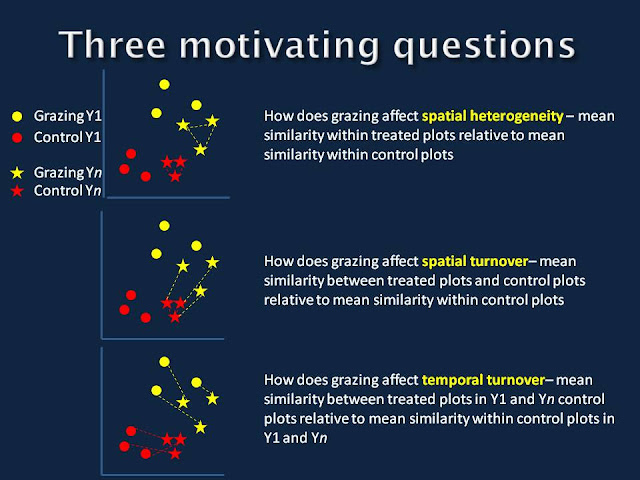 Staying with the recent theme of seed germination that I have been exploring in recent posts ........  I thought I'd update you on a new project I'm starting.

Germination of semi-arid plants is usually cued to rainfall which is unpredictably distributed across years. Plants must cue their germination to rainfall events that are heavy enough to ensure sufficient moisture for seedling emergence and survival; hence, it is thought that this cue is moisture availability. In variable environments (i.e. drier systems with a large coefficient of variation in mean annual rainfall), it is predicted that a smaller fraction of seeds from a population will germinate at any one timeafter rainfall compared to species whose populations have evolved in more mesic or predictable environments (i.e. systems where the mean is higher and the coefficient of variation is lower). Despite this fairly simple hypothesis, it has not been well studied in Australia, reflecting the gap in fundamental autecological research that exists.

Temporal variability in the environment affects the evolution of life history characters and, as such, leads to population differentiation in traits such as germination. This is called adaptive bet-hedging but this ecological theory has rarely been tested in . Understanding how germination varies with environment within species, and across populations, is also critical for understanding the adaptive potential of species to deal with changing climates in situ and hence, the question of bet-hedging has much applied as well as theoretical interest.

If you are interested in bet-hedging and seed germination, these paper give a nice entry into the field: