Managing sites for biodiversity based on plot-level data


A simple, but powerful realisation hit me the other day while I was away on a field course with my 3rd Year Botany students. We went to Cape Conran in the east of Victoria to study fire and diversity relationships in sandplain heathlands. We set the students some questions for which they had to design a research project. They did a great job, so much so that it made me think about how we use scientific data to inform conservation management actions.

One of the questions we asked was: what is the relationship between species number and time-since-last-fire? This is a very 'old' question in ecology, with lots of evidence that species number initially increases after fire, then plateaus off, before declining with increasing time. As such, it is recommended that to maintain diversity in heathlands, they need to be burnt at frequent intervals. Reading the literature, it is evident that fire return intervals of 10-25 years are recommended.

Land managers take advice about the ways in which to manage biodiversity from scientists, so it is important that the advice we give is based on solid data from well-executed studies.

At Cape Conran, we asked whether species number declines with long fire-free intervals to test the well-established understanding of heathland ecology. But we decided to take a different approach to that which is usually employed.

In many of the 'fire in heathland' papers I read, I see that botanists compare the number of species in a quadrat (this is known as Species Density) across sites with known fire histories. Importantly, in these studies it is usual that the same sized quadrat is employed across sites to generate Species Density estimates. But this might be a flawed approach. Imagine you set up a 4 x 4 m quadrat in recently-burnt heathland. The plants are very small and many of them can 'pack' into the quadrat. As plants age, they become bigger and hence, it is likely that fewer of them will fit into your 4 x 4 m quadrat. In long-unburnt heathland, heath species are as large as they can grow and even fewer will fit into your (what now seems small) quadrat.

So, while Species Density might inevitably decline with time-since-fire in your small quadrat, this is not the same as saying Species Richness declines across the site. Species Richness is the number of species you find in a defined site - in our case, a heathland - and it is this scale that a manager manages. Hence, is there a mismatch between the scale of evidence that botanists have used to assess fire impacts (the plot level) and what managers actually need to know - how do I manage heathland to maintain their diversity?

To answer this question, we set out to sample Species Richness across sites that contrasted in time-since-fire. We used lots of small 1 m2 quadrats (n = 25) at each of three sites (that differed in time-since-fire: recent to long-unburnt) rather than relying on one or two big quadrats as is usually done. These were spread out across each heathland and all species were recorded. The results were VERY surprising! 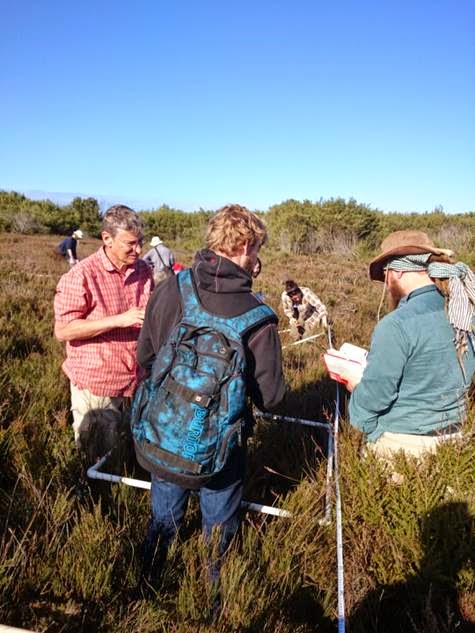 ﻿﻿
As expected, Species Density was highest in the most recently-burned areas compared to long-unburnt areas (15 vs. 8 species per m2). But then it got interesting. The total number of species observed in each site across our 25 quadrats was the same - 39 (all of them native). So, despite there being many more species in the small quadrats in the recently burned areas, unburnt areas supported the same number of species across the site. Yes, they were 'rarer' and some were different species, but if the aim was to maintain species richness at the Site Level, the level at which managers would be most interested, then the need for fire was not so clear.

And, when using some fancy statistical techniques to assess how much more biodiversity would be present if we had sampled more quadrats (the procedure is called 'rarefaction'), we actually expected more species in the long-unburnt heathland than the recently-burned heathland (60 vs. 41).

It became apparent that frequent fire might actually hold-up succession of sandplain heathland to more complex, diverse systems rather than maintain it. Frequent fire would likely knock out species that have long primary juvenile periods or that take time to colonise after fire. Far from allowing such species to be members of the community, frequent fire might reduce spatial heterogeneity and hence, reduce habitat complexity. Such thinking hasn't been applied to heathland ecology before in south-east Australia and while it is too early to suggest we change our current practices (of frequent fire), this student research hints that maybe a rethink is in order.

And, as I said at the start, it highlights that the relationship between Plot-level data and Site-level responses are not always as clear-cut as might be imagined. Stay tuned........