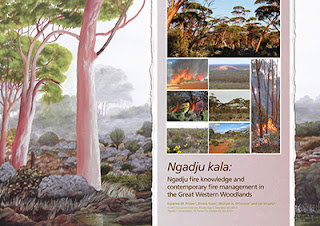 Contrary to the common assumption that Aboriginal burning was widespread and frequent (e.g. Bill Gammage's book The Biggest Estate on Earth - see this YouTube video of Bill's view of the role of aboriginal burning), the report shows that the Ngadju community from south-western Australia were highly selective in where they burnt their country. Ngadju country covers a significant part of the region known as the Great Western Woodlands in south-western Australia. This region is nationally and internationally significant for its large, relatively intact expanses of eucalypt woodlands, shrublands, salt lake systems and mallee. When I was there a few years ago, I was blown away by the shear scale of the woodlands, and the beauty of the landscape. It's well-worth putting it on your itinerary when you're in Western Australia.

Ngadju used fire as a cultural tool for looking after rockholes and grassy areas, for protecting important cultural sites and special plants such as water trees, for access and hunting, and for encouraging grasses. The old growth woodlands were rarely burnt deliberately. Large-scale burning was not a common practice.

Some of the report’s key findings include:

The report, written to document Ngadju knowledge about fire in Ngadju country, can be
downloaded at http://www.csiro.au/Outcomes/Environment/Biodiversity/Ngadju-kala.  As a land management tool, fire obviously has a more select role in Ngadju country than in other regions of Australia such as the tropical savannah and spinifex country where large parts of the landscape are frequently burnt. It highlights the importance of interpreting anecdotal historical information about fire and landscape structure (e.g. settler's diaries, paintings, etc) through the lens of local (rather than regional) scale ecological processes.
Posted by John Morgan at 22:17

Hi John.
It's good to see that the nuanced approach of indigenous fire management is being recorded at a local scale.
Are you aware of any other studies of this type, that are based on consultation with the local indigenous community?

Hi Anna - thanks for your comment. There are relatively few examples of this type of approach in southern Australia. None I am aware of at least. This approach is much better developed in the savannah of northern Australia where indigenous fire management is still practiced - JOHN

Good to see this, and I'm enjoying reading it. Much more nuanced and concrete than Gammage's dangerous generalisations.

I do wonder if the unique character of these SW open forests could be used to argue they are a unique case in fire management: as the study points out, it is unusual to find woodlands such as these in an area of around 250mm or less annual average precipitation. I'd imagine the fuel build up would be much slower than wetter forests, and also much slower than northern savannah.