The basics of repeat photography

The photo below, taken in 1979 by La Trobe University botanist Neville Scarlett, is of one of the best remnants of native grassland near Melbourne called Truganina Cemetery. I know this site really well as I did some of my Honours thesis research there, on the recruitment ecology of the Button Wrinklewort.

What is great about old photos is they convey information about the historic state of systems, well before many of us were involved in management and research, and they potentially allow current condition to be compared to prior states. Clearly, this grassland had a high cover of forbs in 1979. The silver coloured vegetation is probably the Lemon Beauty Head (Calocephalus citreus), the yellow flowing daisy is Chrysocephalum apiculatum, while the white sprays are mostly Bracyscome dentata in the background, with Stackhousia (Creamy Candles) in the foreground. While tussock grasses (Themeda triandra) are obvious, they certainly don't dominate. You get the impression this was much closer to a herbfield than a grassland.

﻿
﻿
I thought it would be great to take an up-to-date shot of the same location to see how things have changed over the last 30 years. Truganina Cemetery is well-known as an important grassland remnant (it has two nationally endangered species present) and it is managed by irregular burning, while vehicle access is prohibited. Armed with a tripod and digital camera, I went out a few weeks ago to capture the same shot. Below is my effort to replicate Neville's original shot.

Two things are obvious. Firstly, and probably most obviously, it is clear that much of the colouring afforded by forbs in 1979 has dramatically declined, indicating their cover and abundance has likely diminished by an order of magnitude or more. All four species that I mentioned as obvious in the original shot are still present, so what we are looking at is a dramatic change in species evenness rather than local extinction. We could visualise these changes by constructing a rank-abundance curve, plotting the percent cover of species from most common to least. This would hint that dominance has shifted completely from a multitude of forb species to one native grass, and that forbs are mostly now at very low cover.

Secondly, I found it really hard to re-take the orginal shot. In this case, I don't think it mattered hugely because the magnitude of the change is so great. But, it got me thinking about how I might go about doing this better next time. Using old photos to assess environmental change is becoming increasingly popular in environmental science. Part of this, I suspect, is that old photographs are now being scanned and stored in archives such as the excellent one called TROVE (curated by the National Library of Australia). Hence, how might one go about doing this accurately?

The field is called "repeat photography" or "re-photography". It seems that a pretty common method is indeed just walking out to the same spot and taking the same photo. But then you want to match the conditions as well as possible. There's a lot going on with seasonal variation and time of day in terms of shadow length. Visual parralax is the key to the basic technique; you can get pretty close to the same location by comparing rocks and details that are partially obscured by objects in the foreground... but this does not give you exactly the same picture, just something that is clearly the same viewpoint of the same landscape. Part of the problem here is that an oblique perspective creates a continuously varying scale and this makes it hard to link landscape features in the photograph to absolute spatial co-ordinates.

A good starter is Methods in Re-photography: A Research Method for Amateur Researchers. This has some really excellent background on the scientific relevance and utility of the technique, and a very quick'n'dirty guide to the fundamentals. Apparently the bible on the method is called Repeat Photography: Methods and Applications in the Natural Sciences,edited by Webb et al..

It is pretty clear that matching photos can be a powerful means of comparing local changes in vegetation, particularly when photographs extend well back in time. Aerial photographs are great for the same reason, but most don't extend beyond the 1940s in Australia, so repeat photography has great merit to address small-scale, long-term change. I'll leave you with the nice example below by Roush et al. (2007) that compares the alpine treeline ecotone in Glacier National Park in 1930 with that in 2003. Note the massive invasion of trees across the entire landscape! 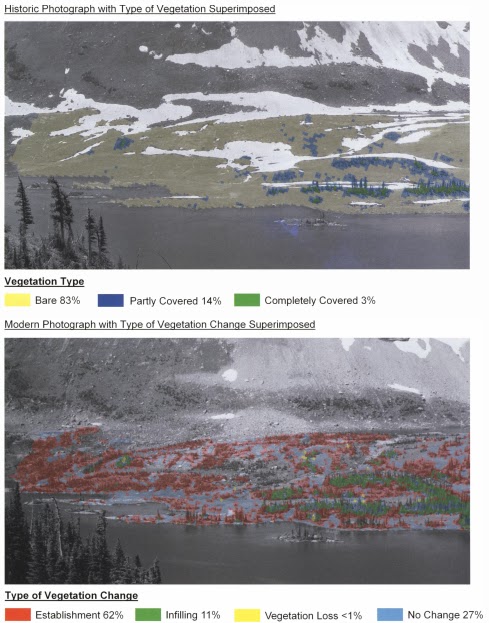